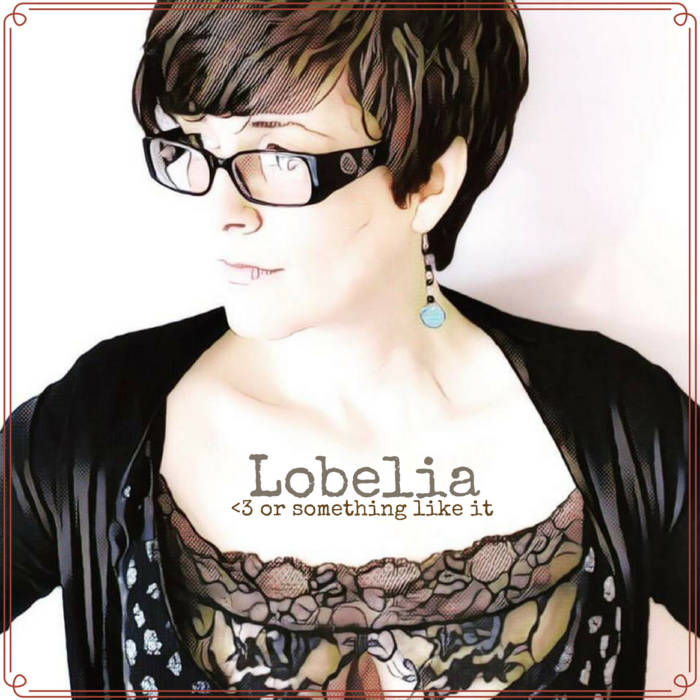 Rachel Rhodes Lobelia writes lyrics that can connect like a caress and a cross hook at the same time. Her melodies have taken up permanent residence in my head and heart. I tape up my heart after every listen, then I press play again. Favorite track: Oh California.

Love Or Something Like It is the breakup album for the breakup that never happened. The first full-length studio release by songwriter Lobelia Lawson in 13 years and arguably the best writing and performance of her career. Produced by Juno award winning producer/songwriter Rob Szabo, Love or Something is textural and deep, but with an edge of positivity and tongue-in-cheek lyrics that Lobelia's songs are known for.

All songs written by Lobelia with the exception of:

All this time: co-written with the brilliant academic/songwriter Emily Baker emilybakermusic.bandcamp.com

Say That You Do: co-written with amazing producer/writer Rob Szabo
robszabo.bandcamp.com

Guitars: Lobelia and Rob Szabo
Piano: Lobelia and Rob Szabo
Programming: Rob Szabo
Vocals: Lobelia with the exception of Rob Szabo on Say That You Do
Bass: Steve Lawson on Fall, Love or Something, and Paper and Envelopes
Produced by Rob Szabo and Lobelia
Engineered and mixed by: Rob Szabo with the exception of:
Paper and Envelopes: Mixed by Steve Lawson
You: Mixed by Ian Shepherd
All tracks mastered by mastering wizard Ian Shepherd
productionadvice.co.uk/about/

This album was funded through PledgeMusic and would not have been possible without the help of the help of so many amazingly lovely people and even those who stopped by my house to drop by some funds for the album. I don't know where I'd be now without this project which helped me through the toughest year I've ever known.

Special thanks to: Leslie Collier, who helped me refine the album cover and was a great cheerleader for me throughout this project. He always makes me smile with his emailed jokes when I need it most. Love you Papa!

Rob Szabo: I am so pleased that we got to do this album together. What a joy and a luxury to hang out for 9 days working on this. It wouldn't have evolved into the amazing unique project that it is without your help. Thanks for getting what I wanted to do, and for all the encouragement and positive cursing!

Ian Shepherd: What a wizard you are! I can't tell you how much I appreciate your help getting this album to sparkle.

Emily Baker: I'm always inspired by you as a human and as a creative force. So pleased to put the song we wrote together first.

Emma-Jane and Jen: Thanks so much for putting up with me and giving me a home for 9 days while I was in Canada recording this album. Was so nice to come home to such amazing folks each night.

Steve Lawson: Whilst you brought this album about by breaking my heart at the start of 2016, I'm proud of how far we've come, at how dedicated you've been to being a better person...a better husband, a better friend, a better father to Flapjack. I don't know anyone else who would have been able to bear the weight and truth of some of these songs, and to help me work on them as well. I'm glad that you're part of the break-up album that never happened. I'm glad we're still happening.

This album is dedicated the the memory of my beautiful mother Nancy Collier and my gorgeous departed friend Donna Delorme. The universe gained two beautiful souls when you passed. We'll miss you forever.

Award winning songwriter and multi-instrumentalist Lobelia has been featured in Billiboard Magazine, PBS and worked as a studio musician for 10+ years, She books and hosts a variety of songwriter nights for Birmingham's best small artist-led venue, Tower of Song and is an advocate for sustainable touring, She travels the world performing at house concerts and small venues. ... more

It's battle cry, as we list to the side
And the storm rages on
I take the wheel before, you crash the tidal bore
Oh, but we're coming around
There's hope in between the waves
Should we dropped anchor and
Thrown our past in the sea
The battle cry, falling silent beside
Our abandoned debris
Track Name: Fall
Fall
He sees me leaving, he'll never ask me to stay
Love an emotion, that only gets in the way
Of life, or work...he's the rational kind.
Love is the last thing, that would enter his mind.

Chorus:
And I'm older now, God knows I'm no wiser
I can read the signs, a little better that's all
And I've made mistakes, but I know what really matters
I can stop myself, if I'm starting to fall.

Sometimes my heart feels, so battered and bruised
From all the years that I wasted on you
Sometimes my heart feels so cruel to be kind
And like a clock I just slowly unwind
Track Name: Love Or Something Like It
Crazy hazy summer days
Dancing 'round in pouring rain
It's not love...just something like it
There's a gentleness behind your eyes
You say it's been there, since you were a child
It's not love, just something like it.

So stand aside and let me go
I've got my own mind, it's time that you know
I need love, not something like it.
I'm not your puppet on a string
I don't raise my voice when you tell me to sing
That's not love, it's nothing like it.

I believed that I didn't care
After all, love and war ain't fair
And I believed that I didn't know
I'm an old fashioned girl
You got no room in your world
I need love...not something like it
Track Name: You
I'm on the train headed to somewhere
Thinking of you
That's how I spend most of my time now
So it's nothing new
And I could just go far away
Iffen I got a clue
But I figured this too shall pass
As these things tend to do

And I'm frozen here to the ground
Waiting for that faint little sound
When my heart tells me that it's true
All this time, it could have been you.

And I think about speaking my mind now
But what would that change?
I'd still be here wishing for sunshine
While you pray to stop the rain
And maybe we'll meet in the middle
If the path doesn't change
But after all of these years
Taking it just seems so strange.

I dreamed that we made different choices
In our lives
And though they seemed wrong at the time
In the end they all turned out fine.

And I'm frozen here to the ground
Waiting for that faint little sound
When my heart tells me that it's true
All this time, it could have been you.
Track Name: Ghost
She won't be able, to live with my ghost
With my name upon the lips you love the most
Like a shadow cast on all that's passed between us you will know
She won't be...me.

She won't be willing, to lend you the strength
To recognise the rope you're hanging yourself with
And as the ship goes down and all has drowned in some forsaken sea
She won't be...me.

I am at your side
In your corner you will find me
And I can't make you change your mind
But love for you will never leave me
Never leave me.

She won't be able to recognise
That the mythology of new is full of lies
And the person that you thought you knew can't look you in the eyes
She won't be...me.
Track Name: Oh California
Oh California
You have done me wrong
Coveting a dream that he sold for a song
And all the plastic faces
Frozen in a smile
Staring at the feet that never walked this mile

Oh California
Do you think it's fair
That you are in my life though I don't want you there
Everything is broken, shattered by degrees
As I pick up the pieces for not one but three

Oh California, I still believe
Track Name: Say That You Do
I knew things were desperate
When he left here that day
His eyes wouldn't meet mine at all
Just please don't be stupid, was all I could say
He mumbled "I love you, I'll call."

I knew things were over when I boarded that flight
As I steeled up my mind for the fall
We hadn't been close in a very long time
it seemed like she just didn't want me at all.

Don't say anything
We're over
I still love you, I still want you
Track Name: Paper And Envelopes
I feel so tired I could sleep till the end
This bed like an anchor
While the sea closes in
And I feel so lost that I can't even breathe
Your memory, the pillow
That is smothering me

I was blindsided, I had no way to know
No we weren't happy
But I thought that how love goes
And I feel so angry
Your voice rings in my ears
Who gets the pardon
From the last 20 years?

I could forget you
Move on and stand clear
But I'll never forgive you
For leaving me here
Track Name: Saying Goodbye
Winding roads, never knowns
Falling beneath our feet, fast asleep
From hanging on

Guiding light, milky white
Believing in more than this
Is hardest when you're all alone.

We'll say goodbye tonight
The last thing we want to do
Your name filling lungs like air
As you prepare, we do too.

Never fair, too much to bear
Stretching from weeks to years
Fighting fears that never fade

We'll say goodbye tonight
The last thing we want to do
No Pain no wait and sees
As you breathe out, you fly free

And we'll say goodbye tonight
The last thing we want to do
No Pain, no wait and sees
We breathe out; you fly free.
Track Name: Deep Blue Sea
I ran away to an island
Built up a castle in white sand
Set my whole life to remote and
Breathed a sigh of relief

And I feel I'm losing myself
I am in irons, torn out to sea
And I wonder if you can tell
When you will notice
There's nothing left but deep blue sea

I towed the line to the rope's end
Hoping to find a break to mend
But found only dashed expectations
And an anchor secured by debris.

And I feel I'm losing myself
I am in irons, torn out to sea
And I wonder if you can tell
When you will notice
There's nothing left but deep blue sea

Bandcamp Daily  your guide to the world of Bandcamp

Featuring Oakland sounds from the Smart Bomb collective and Samplelov.